This site does not support Internet Explorer. Please use a modern browser such as: Chrome, Firefox, Safari (included with Mac OS) or Edge (included with Windows). 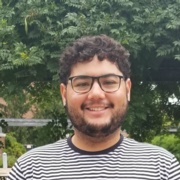 Kevin Santiago Morales graduated from the University of Puerto Rico at Mayaguez with a BS in Industrial Microbiology. As an undergraduate, his research involved metagenomics to assess antibiotic resistance in mollusk gut microbiomes. He was also a scholar at the NIH Postbaccalaureate Research Education Program at Virginia Tech (VT-PREP). There Kevin worked with the Stevens and Kuhn labs to determine the impact of probiotics in aquaculture-raised fish gut microbiomes. His interests have laid mostly in the microbial ecology of host-associated environments of plants, humans, and animals. Continuing his PhD, Kevin would be most interested in using multidisciplinary approaches to answer questions on how hosts and microorganisms are interacting within their environment, especially with methods he has not been exposed to before. His previous experiences have allowed him to develop skills in data and sample acquisition, but he would like to venture out to other techniques that can be used to answer these types of questions. These can include but are not limited to bioinformatics, metabolomics, modeling, and other techniques that could be used in microbial ecology.